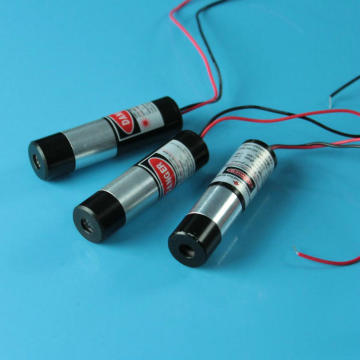 Worldhawk offers a range of lasers including a broad selection of Laser Diode Modules in colors such as red, green, blue, or violet. These laser module can be used in Industrial marking devices, laser medical equipment, stage lighting and laser targeting devices, Machine vision, Laser Alignment, Laser Positioning Surveying Instrument, Laser Sight and so on.

Laser beam is a super-bright light with large-density energy, so you should be careful to avoid injury or accident during operation.Eyes should never been exposed to the laser beam or its reflection.Laser beam should never be pointed at flammable substances such as alcohol, gasoline, etc.

2)Working distance: Customized according to the customers. Or provide the adjustable laser module when there is no constant working distance.

Product application introduction：
Sapphire parts are manufactured from single crystal sapphire, making them ideal for demanding applications (such as laser systems) because of their extreme surface hardness, high thermal conductivity, high dielectric constant and resistance to common chemical acids and alkalis. Sapphire is the second hardest crystal next to diamonds.
Laser Line Generator Lenses, also known as Powell lenses, generate a straight, uniform laser line by fanning out a collimated beam in one dimension
Optical Sphere Lenses are optical components designed to focus or diverge light. Optical Lenses, which may consist of a single or multiple elements, are used in a wide variety of applications from microscopy to laser processing.
Cylinder Lenses are offered in both plano-concave and plano-convex configurations, they are typically used to focus incoming light to a line, or to change the aspect ratio of an image.
High-quality optical mirrors are available for use with light throughout the UV, VIS, and IR spectral regions.
Optical windows are applied to isolate different physical environments while allowing light pass. It can be widely used.
Prisms are widely used in optical system, which can reflect, deviate and rotate beams of light as well as dispersing their wavelengths.

Changchun Worldhawk Optoelectronics Co., Ltd, established in 2010 in China Optical City - Changchun, we have four branches in Changchun, Nanjing, Beijing and Hong Kong. We can provide all kinds of optical products processing, coating service, assembling the lens,high-altitude monitoring quipment and airborne photoelectric stabilized platform and imaging system. We consider our customer relationship to be a valuable asset, We understand that your application is not standard and so we offer customization of all of our products. Worldhawk have many experienced engineers and many skilled workers, they are the important guarantee for the higher quality products. We can ensure higher qualified rate because of the precision testing equipment.

Email to this supplier